Everything You Need to Know About the History of Pizza

Did you know that pizza dates back to the Stone Age? Well, maybe not pizza as we know it today, but there are records of people adding toppings to baked flatbreads throughout history.

Several ancient societies, including the Persians and the Greeks, had their own versions of pizza-like food. Similar flatbread dishes were found in other areas, such as China and India. If you're intrigued, keep reading to learn more about the fascinating history of pizza -from the very beginning, right to our ovens here in Calgary!

The Delicious Origins of Pizza

Even though people have eaten flatbreads for centuries, a few dishes are thought to be precursors to modern pizza. One of these dishes is pizzarelle, kosher Passover cookies eaten by Jewish people during the reign of the Roman Empire.

Another precursor is focaccia bread, which dates back to the time of the Etruscans and is still eaten today.

While there's some debate about the origin of modern pizza, most people agree that it dates back to 16th-century Naples. It was initially an inexpensive street food to feed the large population of the working lower class throughout the city. These early pizzas featured ingredients often used today, such as cheese, tomatoes, anchovies, and garlic.

As pizza became more and more popular, people began opening pizza restaurants. Antica Pizzeria Port'Alba opened in1830 and is the first pizzeria in the world. This charming pizza restaurant is still in business today in the center of Naples!

Until the 19th century, pizza was mostly unknown outside of Naples. But when Neapolitans began emigrating to other countries, they brought their love of pizza with them...and we are sure glad they did!

Toppings and Types of Pizza

Over the years, many different types of pizza have emerged. Each type is defined by the toppings used. You can put anything on a pizza, but popular toppings in Canada include pepperoni, mushrooms, chicken, spinach, and ham.

One of the most controversial types of pizza, the Hawaiian pizza, originates in Canada. Canadian restaurateur Sam Panopoulos invented it in 1962. Hawaiian pizza is topped with pineapple and ham and is a staple at many pizza restaurants.

At Atlas Pizza & Sports Bar, we're proud to offer a great variety of pies for your enjoyment. Swing by and taste one of our in-house specialty pizzas, like our personal favourite, the Atlas Special, which combines the best of Mediterranean and Canadian flavours by combining ham, pepperoni, mushrooms, shrimp and olives.

Pizza in Canada - From Humble Beginnings

Canada's first pizzeria opened in 1948 in Montreal. By the late 1950s, many restaurants started using pizza ovens. Pizza grew in popularity during the 1960s when many pizza restaurants opened across the country.

There are several national pizza chains across Canada and many local pizza restaurants. There are many regional pizza variations, often influenced by the local cuisine. Take a tour of the world by browsing our pizza menu!

The history of Atlas Pizza starts in 1975. Mike Theodossopoulos founded it after opening a neighbourhood pizzeria, which has since grown to become one of Calgary's oldest dining establishments. His son Chris joined the team in 1995 and has been the key figure in this organization ever since!

We hope you found pizza's history fascinating and learned something new. But more than anything, we hope it inspired you to eat some pizza with us!

For over 40 years, Atlas Pizza & Sports Bar has served the best pizza in Calgary and plenty of other delicious food and drinks. Stop by today for our award-winning pizza or place an order for delivery!

Grow your business.
Today is the day to build the business of your dreams. Share your mission with the world — and blow your customers away.
Start Now 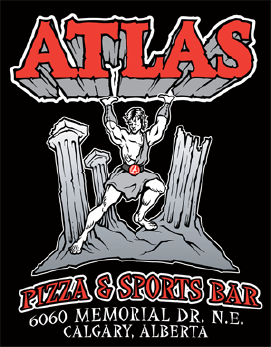